What can I learn from a Defense Industry CIO?

Transforming an IT Ecosystem at 30 Thousand Feet

Revolutionizing the Aerospace Sector with Cloud

Staying Ahead of Schedule: How Tail Planning Can Enhance MRO 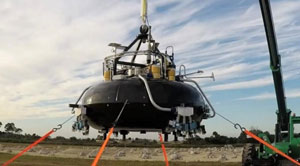 LAS VEGAS, NV: Reaching space is expensive, time-consuming and risky; and to achieve this experts invented space crafts. On December 5, 2013- Moon Express, a privately funded lunar resources company, unveiled its ‘MX-1’ lunar lander spacecraft.  Now, with the Google Lunar XPRIZE team, Moon Express announces a launch services contract with Rocket Lab USA’s Electron rocket. The launch will be carried out as part of Google Lunar XPRIZE (GLXP), also called Moon 2.0. It refers to an inducement prize space competition organized by X Prize Foundation, sponsored by Google. The contract  includes a series of five launches, where, 14 privately funded teams were also participating. For verification and approval from Google Lunar XPRIZE extension, Moon Express has to submit their official Notification of Launch contract, which is followed by the actual launch of MX-1E lunar lander on the Moon’s surface by 31, December 2017.

Naveen Jain, Co- Founder, Moon Express argues that, "The company is building disruptive technologies that will forever change the cost of access to space, including the asteroids and even the moons of Mars.”

The launch will be carried out in association with the Electron rocket technology of Rocket Lab. The technology projects the spacecraft to commercial orbits with a 95 percent reduction in cost. MX-1E carries robotic technologies, advanced micro-avionics, and a unique toroidal structure to produce an eco-friendly robotic spacecraft powered bysolar panels. It uses Hydrogen peroxide (H2O2) as fuel. The main engine consists of a dual mode bi-propellant system; also, kerosene serves as an after-burner which helps the spacecraft to pass the Earth’s orbit. In addition, it also makes use of Geosynchronous Transfer Orbit (GTO) to reach the Moon’s surface.

"We are now taking advantage of exponential technology like 3D printing and inexpensive sensors to collapse the capital needed to access the moon. Coupling these technological advancements with today's news about our Rocket Lab launch contract is a huge step forward for us in opening whole new markets for space exploration." says Naveen.

Cyient: Driving Innovation and Growth in the A&D Lifecycle

Cyient: Driving Innovation and Growth in the A&D Lifecycle

Matchbyte: Helping to Adopt Technology, at the “Speed of Light”

EmpowerMX: Keeping Airlines and Their Profits

Metron Aviation: An Answer to the Optimization of Air Traffic

Kaizen Technologies: A Complete Spectrum of Design and Manufacturing Services

Plataine Technologies: Bridges The Gap Between CAD And ERP

Avicor Aviation: Taking Into Air with Ones Own Stipulation

Toffler Associates: A Vivid Understanding of the Future Operating Environment

What are the Roadblocks Impeding Product Management?

How Has Enterprise Web Applications Evolved Over the Years?

What Does the Future Hold for Product Management?